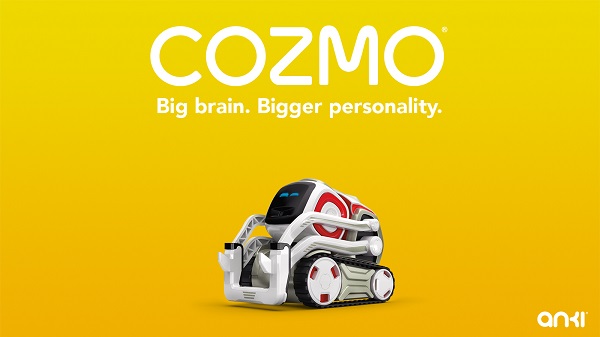 Science-fiction movies have long promised us the gift of robots – big or small, but very smart and helpful.

However, in real-life, the robotic industry has translated only in industrial, scientific, and space applications, with very few companies trying to address the consumers.

Until now. Meet Cozmo, the brain-child of Overdrive developer Anki. If you’ve ever watched Pixar’s animation called Wall-E, Cozmo will look strangely familiar. With its white frame and blue digital eyes, the small robot is a piece of art.

In spite of its size, Anki’s creation packs a lot of hardware – more than 300 pieces have been put together to create it. Cozmo combines robotics and artificial intelligence, and its main purpose isn’t mechanical, or automation.

Instead, the robot has been developed with one focus: to play with its owner. Rolling around on treads (similar to a mini tank), Cozmo is all about personality. Just like its creators explain in the promotional video, the tiny robot is almost like a character in an animation, with quirks and playful expressions.

The way Cozmo was designed to interact with humans only goes to show the developers’ attention to detail. Its eyes and facial expressions are extremely responsive, and the built-in cameras allow it to recognize humans and interact with them.

Among other things, Cozmo can even nudge the arm of its owner if it’s been too long since you played a game together. The best part of the invention, however, might be the sounds that have been incorporated into the robot-toy.

Much like creating a Pixar character, sound effect engineers recorded a lot of possible audio responses that Cozmo can give to its human friends. When it’s placed on its charging dock, the playful robot can even mimic sleeping by playing snoring sounds.

Even though Anki pointed out that robots with Cozmo’s capabilities are usually sold in labs around the world for thousands of dollars, this creative invention comes with an affordable tag: only $179.99.

If nothing else, this price puts the robot right in the impulse purchase range, and all of you who want to own their own Cozmo can pre-order it today. The first devices will be shipping out in October 2016.

Watch the company’s promotional video below: