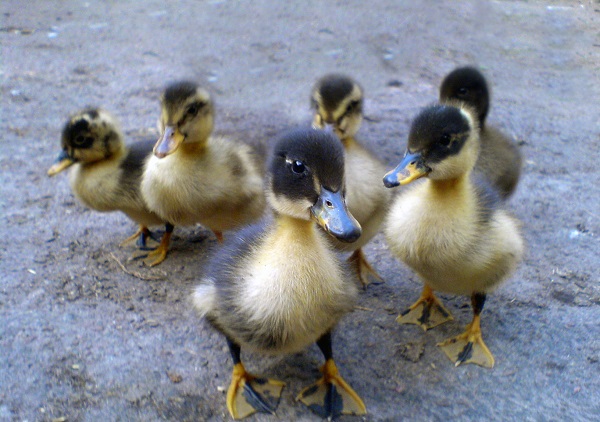 A new Oxford study concluded that baby ducks are capable of abstract thinking. It seems that the ducklings can discern “same” from “different,” proving that they are considerably smarter than we initially thought.

The Oxford researchers involved in the study observed that the level of intelligence of ducks is as high as that of apes, crows, and parrots, making them the brightest animals on the farm.

When ducks hatch, they search for the nearest motherly figure around. During the first fifteen minutes of their lives, they follow around every moving body, imprinting on what they consider being their mother.

In order to test the ability of ducks to recognize abstract concepts, the researchers worked with newly hatched ducklings. The baby animals were exposed to pairs of moving inanimate objects during the first fifteen minutes of their lives, also known as their imprinting period.

After they had imprinted on those particular forms, the baby ducks were then placed in the situation of having to interact with other paired objects like spheres, pyramids, and other geometrical figures.

The conclusion of the researchers was that the little birds were more prone to following the matched pairs of figures than the unmatched ones. This translates into the fact that, ever since birth, they were convinced that what is “same” is good.

When forced to interact with “different” pairs, they displayed a more hesitant attitude, leaving the researchers to believe that the ducks are more capable of abstract thinking than they were credited so far.

“This is the first demonstration of a non-human organism learning to discriminate between abstract relational concepts without any reinforcement training. The other animals that have demonstrated this ability have all done so by being repeatedly rewarded for correct performance, while out ducklings did it spontaneously, thanks to their predisposition to imprint when very young,” the lead researcher declared.

However, this doesn’t necessarily mean that farmers will soon partner up with their quacking habitants for a game of chess. Researchers believe that their imprinting mechanism is just a survival skill. Ducklings are helpless when they’re born, and they need to stick close to their mother, that’s why they imprint.

There’s also the problem of the duck’s ability to swim, walk, and fly. Baby ducklings perceive their mother as a constantly changing shape. This is why they had no problem in following different shaped figures as long as they were paired according to their figure.