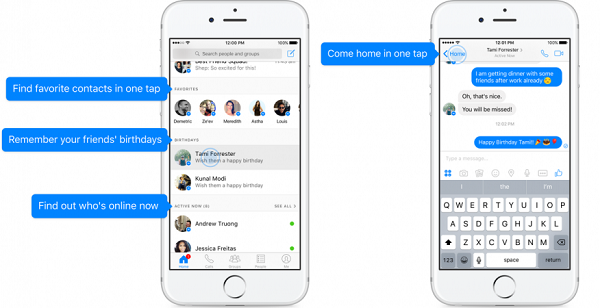 Facebook’s instant messaging app has a new update for you, and it’s a big one. The Messenger app has been redesigned to provide users a better experience, more in line with their needs.

According to David Marcus, the Vice President of messaging products, the update has been created under the statement of “reinventing the inbox.” Users across the world should expect to be introduced to the new mobile app in the following week.

The reinvented interface of the inbox will also include a Favorites section from now on, where people will find the contacts they chat with the most.

The Active Now tab is still featured, in addition to a section for birthday reminders. Even when you don’t check your Facebook Home Page, this new section is going to make it easy for you to remember your friends’ birthdays.

At Facebook, employees are aware people connect in new ways; in response, the Messaging app needs to adapt to reality – whatever that looks like. It’s a challenge to constantly come up with simpler and easier ways to start conversations, but Facebook Messenger seems to handle it well.

Having chronological lists of threads is no longer the best way to communicate, so Marcus has headed the search for a new structure that transforms the conversations’ history into a “more relevant model.”

Employing new algorithms that allow Facebook to detect a ranking in terms of priority is one of the ways to do that. Consequently, users are provided with more relevant content based on their individual characteristics.

In the Android app, users will also be able to use the new standard SMS integration, which is a huge change. Now, people can communicate with others through Facebook Messenger even when the other person doesn’t use the app.

From Facebook’s perspective, all these changes are part of something bigger: the complete reinvention of the instant messaging app. However, from the point of view of tech-specialized writers and analysts, the update doesn’t look as good.

They have an issue with the limited number of innovative features, not enough to call the latest update a reinvention. Either way, the options that are now available to users are not a surprise but a natural evolution of the Facebook platform.
Image Source: IB Times