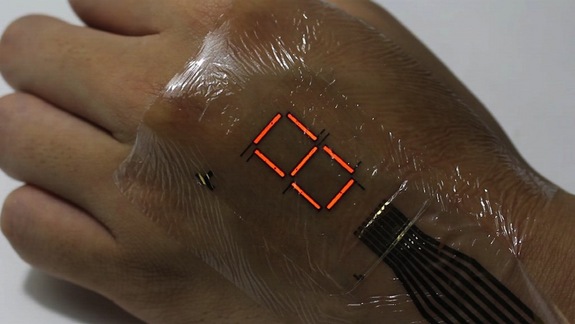 How awesome would it be to have a fitness tracker that can turn into a temporary tattoo when you like? Or a smartwatch so unobtrusive that it feels built into the wrist?

Thanks to a new technology that created an electronic skin (or e-skin), people could eventually get all this and then some – like a monitoring device that doctors can connect directly to an ailing organ.

These are all long-term applications for the ultra-thin and ultra-stretchy material that mimics the flexibility of the human skin. E-skin research has been going on for a while, but researchers at the University of Tokyo have found a way to double it as an electronic display.

Hit by electrical pulses, the lights turn on and off, imitating pixels on a traditional screen. But more complex data can be displayed on various arrangements of PLEDs, such as letters or numbers, much like a calculator screen on your wrist.

Flexible electronics and similar e-skin variants have been attempted by many researchers. So far, they’ve managed to create material that can blend in with its surroundings, detect pressure, and measure body temperature.

But even though it sounds rather sci-fi-like, light-up displays incorporating incredibly thin film isn’t such a new invention. Back in 2013, researchers created flexible PLEDs thinner than spider silk.

However, this type of ‘devices’ never lasted more than a couple of hours when exposed to normal air, a problem that the University of Tokyo researchers wanted to address.

Achieving success with ultra-stretchy electronics is often a matter of combining the right materials that give them the right properties. In this case, the researchers added a protective coating that kept oxygen and water vapor at bay for the e-skin to be working for “several days.”

Other advancements were accomplished, such as getting the new PLED film to produce less heat and consume less power than previous iterations. The new coating can also do more than just light up the e-skin.

One of the experiments combined red and green PLEDs with a flexible sensor to measure oxygen levels on the surface of human skin. Researchers found that the sensor stuck to a finger could deliver data for four days in normal air.

This study and its findings are only some of the many contributions to the larger quest for e-skin that can be released to consumers.
Image Source: Live Science