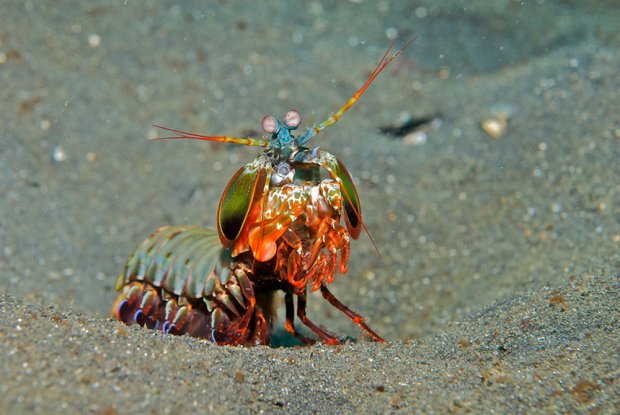 It’s not a novelty for scientists to feel inspired by nature and to invent something that mimics what great Mother Nature has created first. Such is the case of the mantis shrimp which provided the basis for a new kind of super strong materials.

According to a new study by University of California, Riverside, and Purdue University, the concept based on the colorful mantis shrimp will be used to implement new levels of strength and power in armor, aircraft, and protective helmets.

With the help of the dactyl club – a fist-like limb of this small crustacean – the mantis shrimp can easily wreak havoc in the shells of its prey. The scientists described a one-of-a-kind herringbone that protects the club during collision; more importantly, this allows the marine animal to simply smash its prey.

Back in 2012, scientists conducted a study that focused on the dactyl clubs, and their research is now being applied in a variety of industries. Some companies are already starting to turn their discoveries into real products.

This newly discovered region is crack-resistant and safeguards the mantis during its attacks. Due to the crystalline calcium phosphate that is part of its composition, this herringbone is significantly harder than that of the periodic region.

Study lead author Nicholas Yaraghi explained this is the study to take a good look at the structure of the novel herringbone in nature. To understand the functionalities of different structures, the team conducted finite element investigations; they also 3D printed the herringbone for a close-up analysis.

Co-author David Kisailus said that the new discovery “adds valuable information to what is already known and contributes to the team’s ongoing efforts to develop new-generation super strong materials for different applications.”

The exceptional dactyl club of the smasher mantis shrimp has only one purpose, and that is to enable the crustacean to forage. As scientists research further, however, much more information will be discovered, and it might be used to design armor, cars, and other strong materials.
Image Source: mbandf.com