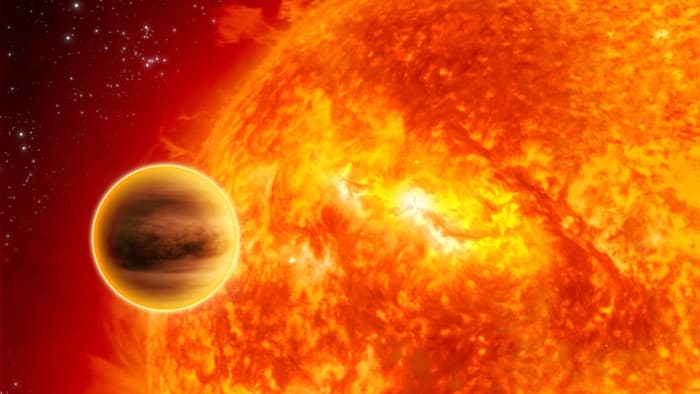 Just 2 million years old, the baby exoplanet PTFO8-8695b is already in big trouble. Its star, the one it orbits, is gradually stripping its gaseous atmosphere, condemning it to swift oblivion.

The young exoplanet takes just 11 eleven hours to complete one orbit around its sun. Due to the tightness of this orbit, the sun’s gravity is rapidly stripping the planet’s outer layers.

“A handful of known planets are in similarly small orbits,” notes astronomer Christopher Johns-Krull in a press release, “but because this star is only 2 million years old this is one of the most extreme examples.”

Two million years might seem like a long time in human terms, but for most planets, it’s actually a very short time. For instance, Earth is roughly 2,300 times older than PTFO8-8695b.

The newborn exoplanet was discovered several years ago when astronomers noticed that the sun it orbits would occasionally dim in brightness. Thanks to H alpha atoms (or highly energized hydrogen atoms), scientists were able to determine that the dimness was caused by a planet passing in front of it.

After analyzing the emitted light, astronomers concluded that there were two sources of H alpha atoms: the star, and a moving H alpha source – our little planet.

“When a planet transits a star, you can determine the orbital period of the planet and how fast it is moving toward you or away from you as it orbits,” noted Lisa Prato, an astronomer at the Lowell Observatory. “And it turned out that the velocity of the planet was exactly where this extra bit of H-alpha emission was moving back and forth.”

Even though the planet’s mass is still unknown, astronomers remain confident that this is indeed a planet. PTFO8-8695b is some 1,100 light years away from Earth, located in the recognizable constellation, Orion.

It’s also about twice the size of Jupiter and part of a class of planets named “hot Jupiters,” gaseous planets that look like Jupiter but are closer to their central stars.

Scientists believe the planet formed farther away from its sun but has gradually gotten closer. We know of other exoplanets with such tight orbits, but that those tend to spin around middle-aged stars.

Not PTFO8-8695, though, which is very bright. And its planet, PTFO8-8695b, has impressed scientists even more because it shines nearly as brightly, although it is just 3-4 percent of the size of its sun.
Image Source: Gizmag