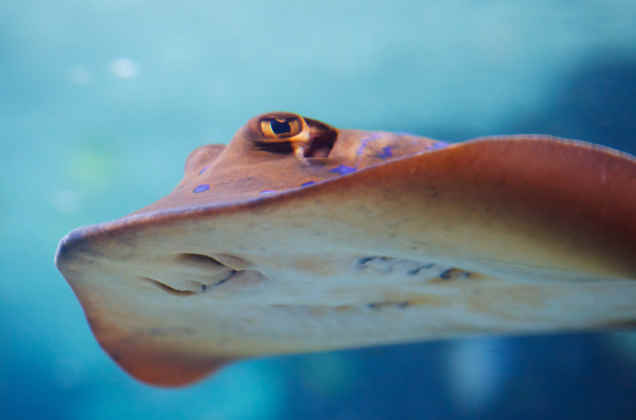 Harvard University physicists have unveiled this week a toenail-sized robot stingray that can swim through water with help from solar propulsion. The ray was bioengineered from rat heart cells and could help medical researchers develop better artificial organs.

Just like its natural counterpart the robot ray can flap its fins to move through water, but the fins are put in motion by light pulses that hit the living rat cells inside the fins. Organic material is tied together through artificial material and particles of gold.

Kevin Kit Parker, senior researcher involved int he project, said the robot prototype could be a rich source of inspiration for scientists from separate fields such as robotics engineers who want to develop cyborgs from living material and medical researchers who are interest in developing better artificial hearts for transplants.

Parker is already involved in a series of projects that employ miniaturized human organs which drug makers can test their new medications on. However, he suddenly became interested in robotics after a short trip to an aquarium with his family in 2014.

He recalls that he had an ‘Eureka’ moment when his daughter tried to pet a stingray, but the animal smoothly escaped her embrace by elegantly swimming away. At that exact moment, the idea of a robot with muscles derived from living heart cells hit him.

His team built the artificial animal’s skeleton from gold which was later covered in silicone. The creature’s brain and muscles were built from about 200,000 rat heart muscle cells.  The team had to first grow rat embryos to harvest the cells.

Next, the team applied optogenetics’ principles to get the muscles moving. Normally, a heart muscle nerve does not contract in the presence of light. But after several genetic tweaks involving a protein that is light sensitive, the muscle cells responded to light.

Currently, with help from tiny light pulses, muscle cells can contract and help the robot move around in a wave-like motion just like a real ray. However, there are drawbacks of using living cells to move the robot. For instance, living cells quickly die so they need to be kept in a mix of warm water, sugar and salt.
Image Source: Flickr