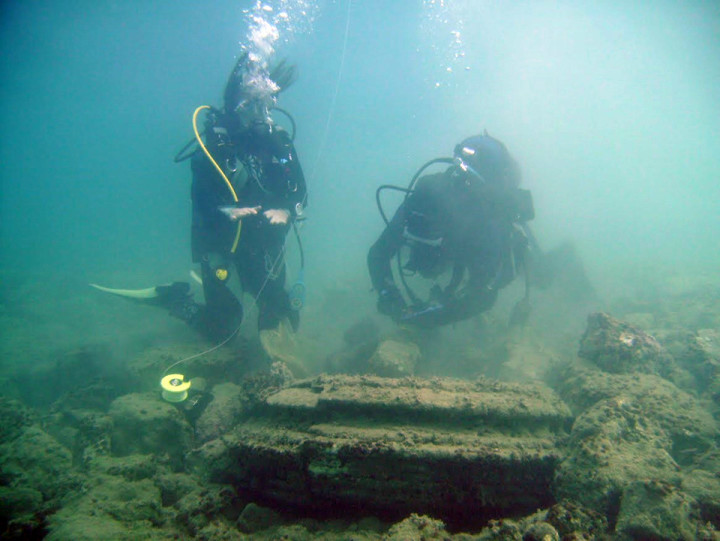 A new study jointly researched by the University of East Anglia (UK) and the University of Athens (Greece) explains how the ancient underwater ruins of a long lost Greek city could, in fact, be the result of a naturally occurring phenomenon.

When divers laid their eye for the first time on what looked a lot like courtyards, paved floors, and colonnades, they were sure they had found the ruins of a civilization that was covered by water when tidal waves hit the shores of the island Zakynthos.

However, a new research reveals that the surprising site is simply a natural geological formation from way back in the Pliocene era. Could these remains be preserved up to five million years?

Senior author Julian Andrews, a professor at UEA’s School of Environmental Sciences, explained that “the site was discovered by snorkelers and first thought to be an ancient city port, lost to the sea. There were what superficially looked like circular column bases, and paved floors. But mysteriously no other signs of life – such as pottery.”

The Ephorate of Underwater Antiquities of Greece was responsible for the careful preliminary examination of the site with mineralogical and chemical analyses; the bizarre discovery is located close to Alikanas Bay.

Then, a scientific research team composed of UoA and UEA staff was formed. They further investigated the texture of the underwater formation and the mineral content of every detail, using X-ray, microscopy, and stable isotope methods.

According to Prof Andrews, the investigation of the site showed that it is, in fact, “a natural geologically occurring phenomenon.” The so-called ‘lost city’ is between two and five meters under water.

“The disk and doughnut morphology, which looked a bit like circular column bases, is typical of mineralization at hydrocarbon seeps – seen both in modern seafloor and palaeo settings.”

The doughnut shapes are likely the result of gases, especially methane, that escaped from the depths of the sea. The sediment fed on the carbon in methane as fuel, which led to a changing in the chemistry of the sediment.

In the end, the formations are made of a natural cement, which geologists call concretion. The surprise was the location of the site; “this kind of phenomenon is quite rare in shallow waters. Most similar discoveries tend to be many hundreds and often thousands of meters deep underwater.”
Image Source: Buzzfeed